There is a big difference between the most spoken languages in the world, and the most useful languages to learn. Despite in theory they should be same, the reality is very different.

If you want to go directly to the list of the most useful languages to learn as a traveler, scroll down the post, as in the beginning of it I will be explaining what makes a language useful or not.

Difference between useful languages and most spokes languages

As I was browsing the internet to find out what would be the most useful languages to learn as a traveler, I haven’t found much content that actually would enlighten me or anyone in that topic.

The main issue is that most articles referring to this topic named the most spoken languages in the world, or the languages which are official in the UN as the most important, which, in most of the cases, feature languages that have not much practical applications.

As an example, among the 10 most spoken languages in the world we have Punjabi and Bengali, or even Hindi for that matter. While I believe Hindi is the most useful of the three, there is absolutely no sense for anyone in the world to learn Punjabi or Bengali unless they want to permanently move to Dhaka, Bangladesh or Amritsar, India and never leave it again. But Amritsar is a really cool name, really.

The problem lies that some languages are only spoken in a certain country or area, or in very small and restricted communities of individuals overseas that came from that area. What makes this language have a big exposure is the fact that the regions where they are spoken are extremely populated, helping the language to make high ranks in lists of the most spoken languages in the world.

The mistake some people make is to assume that, because a lot of people speak this language, it should be important It is not the case, as they are located in extremely unfavorable locations for travelling, business, retiring, or doing anything meaningful. Even if there are exceptions, that are languages spoken by much less people who tend to be much more useful.

What makes a language really useful for a foreign to learn?

There are a few points which helped me to determine how useful is a language to learn for a traveler, and no matter where you are going in the world, you should follow these rules to determine whether you should be learning this or that language in the long run.

Having that in mind, we can go to our list of the most useful languages to learn as a traveler (they are not in order of importance, it is relative depending on your needs):

– Spanish: A part from English, Spanish is one of the most spread languages around the world, and it is the official language language in 21 sovereign states, adding up to a population of 441 million people.

Countries where Spanish is the official language

Spanish is one of the easiest languages to learn for a foreigner also, as its structure and pronunciation rules are not too complicated.

Most of the Spanish speaking countries are safe to visit, with the exception of Honduras, Colombia and Venezuela, you will feel safe in most of the occasions, even if you are travelling solo.

Learning Spanish is also a good option if you plan to retire abroad, specially if you are from US / Canada and Northern Europe, since you will find plenty of sun in all of the Spanish speaking countries in the world, for affordable prices too.

Being a Latin language you can also benefit from the knowledge of Spanish to learn other useful languages with similar grammar and structure, specially Portuguese and Italian.

The main disadvantage of learning Spanish is the fact that virtually all concentration of Spanish speakers is located in Latin America, so you have no interest what so ever to visit this region, it is probably not worth for you to learn Spanish just to visit Spain… and Andorra. 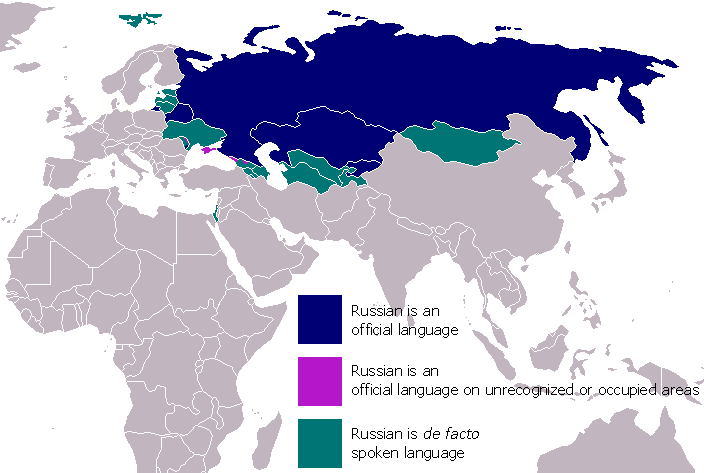 Map of Countries and their use of Russian

Two main factors can explain the reason why Russian is still such an influential language in the world today.

One was the spread of Imperial Russia through vast chunks of the Asian Continent, which were followed by the Annexation of a number of Asian republics to the territory of the Soviet Union.

The second factor was the triumph of the Soviet forces against Nazi Germany, that let most of Central and Eastern Europe, regardless of the population’s preferences, in the hands of the Russians.

After the fall of the Soviet Union and the migration of many of the people that lived in this giant prison that it was. Russian got even more spread out, being spoken as a Native language by 260 milion people which is a far greather number that the population of Russia, which is just under 150 milion people.

The advantages of speaking Russian can put you in a comfortable position from Prague to Tadjikistan, which are just 2 examples of places with a sizeable population of Russian speakers, in countries where Russian is not official.

Speaking Russian in places like the Baltic States (Estonia, Lithuania and Latvia) can also help you avoiding scams, as taxi drivers, real estate agents, gold diggers and a number of other professions normally see foreigners that speak only English as easy pray.

Many people have the misconception that the Russian alphabet is difficult to learn, but it is in fact, very similar to the Latin script used in English. In not more than a few days you can have a decent knowledge of the Russian alphabet, since most of the letters in it have an exact equivalent in Roman letters.

– Chinese: the language of the Han people is the most spoken language in the world and yet being very useful, you won’t have access to talking with the majority of Chinese speakers in the world (since they live in Regions of China which are not very attractive).

A map of Chinese speakers around the World

Despite having a complex writing system using syllabic characters and a tonal system composed of 4 tones, I still believe learning Chinese is a good investment.

The main reason why learning Chinese is a good investment is because its number of native speakers is so high (around 1.2 billion according to estimations), that you can find a Chinese community in almost every city in the world.

Chinese is also spoken heavily in many countries outside China, as Malaysia, Singapore, Canada and Thailand. Just to name a few.

Chinese is also an important language of business, and foreigners speaking Chinese have a high status and respect in Asian business spheres.

There are many places worth visiting where learning Chinese will be useful for you. Among these are Hong Kong, Taiwan, Tibet, Kuala Lumpur and Singapore (and probably Vancouver too).

The main disadvantage of Chinese is most certainly its complexity, as being a non Indo-European language without an alphabet (just a character writing system) it will take you much longer to reach a decent level of Chinese than any of the other languages above mentioned.

– English: for non-native speakers of English it used to be an advantage to speak it some years ago. Now it’s just a big disadvantage if you don’t.

Countries where English has an official status

With the widespread use of internet and globalization English took the place of many other languages, in many other places, when it comes to the first choice of foreign language to learn. Just a couple of decades ago where many people in Africa used to learn French as a second language, now they tend to learn English. These trends can also be seeing in countries where German was the second language like Hungary and Croatia.

While English is probably not the best language to speak when you are in a foreign country, it will get things done for you. And that is the essence of any language, making yourself understood and understand the environment in which you are at.

In case English is not your native language, I strongly recommend you to sharp your knowledge of it in the best way possible. It will help you in virtually any field of your life from career to dating, from cooking to accountancy. Despite Chinese being the most spoken language in the world, most of the information available on the internet is in English, so, knowing English is not important if you are a traveler. In fact, even if you never leave your home town, it’s just impossible to ignore the influence of English language in your life.

English is definitely the most useful language to learn as a traveler in 2016.

Is It Really Worth it to Learn a Second Language?

I do firmly believe so. I can explain this point of view in two simple examples:

– If you are not a native speaker of English, you MUST learn English to travel. It will be very, very complicated to get by otherwise.
– If you are a native speaker of English, it is still important to learn any other language. It will help your brain to understand the different mentality of any people from any country, it will make you to see in the little nuances of the language that each people lives on its own pace, with its own cultural traits. It will make you a more open minded person and also help you to integrate better in any other country that you might visit.

Even if you will travel for a short time for any country in which you don’t speak the language at all, one thing that has always proved helpful for me is to learn at least the very basic words in the language, such as “Good morning”, “How are you”, “Thank you” and “Please”. It really makes wonders and creates a connection with people you wouldn’t be able to communicate at all, which can be interpreted as a sign of disrespect, a careless attitude.

It will not take more than a couple of hours for you to learn the basic 10 phrases you will need to learn in any language. And one recommendation: learn how to say “Excuse me”, it will be very important when you bump into someone in the supermarket and will keep you out of trouble.

Source that helped to create this article: Wikipedia